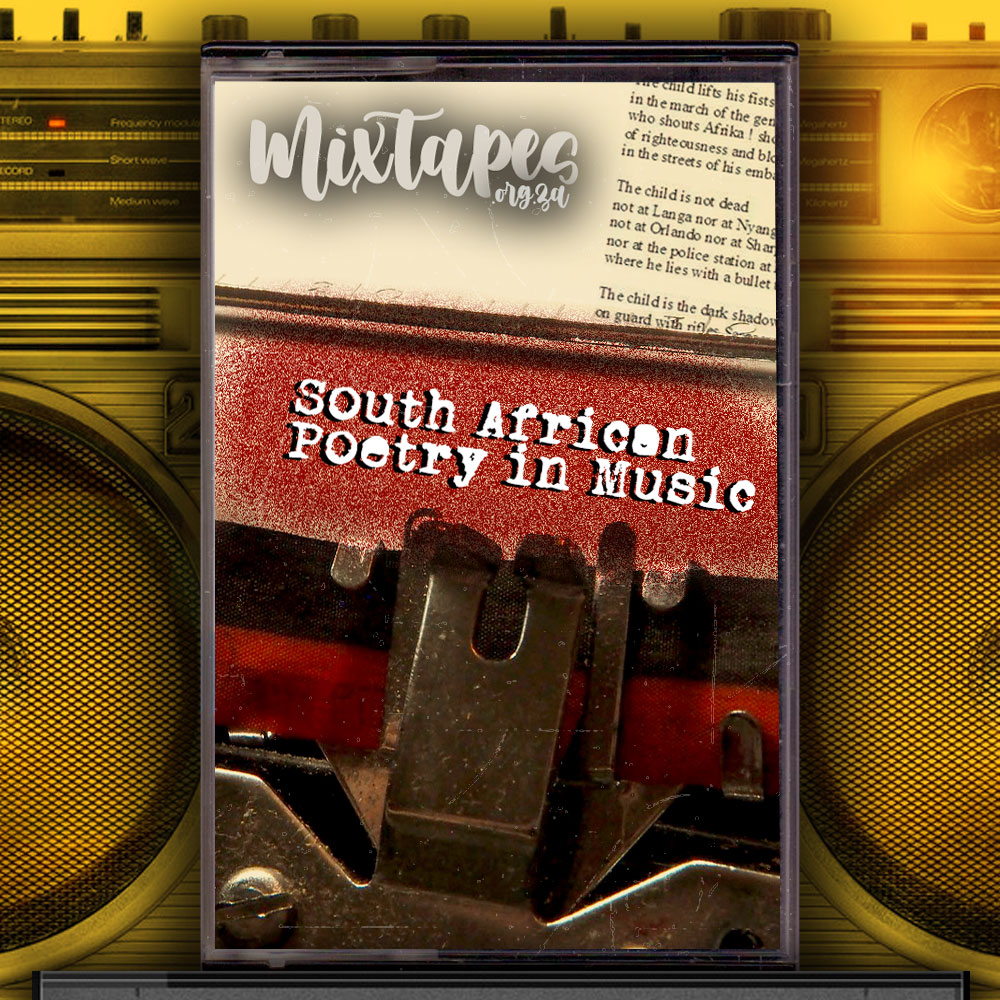 Today’s sleeve notes are are guest-written by poet and anthology editor Alan Finlay.

When Brett Houston-Lock sent me a message asking me if I would like to write this introduction, he also asked if I thought anything was missing from the list of South African “songs based on poems” he had forwarded. It’s a strangely difficult question to answer, not just because it prods the hornet’s nest of when poetry is song and song poetry, but because, off the top of my head, I couldn’t think of any other examples.

What Houston-Lock and his co-conspirator Michael Drewett have come up with is a rich and surprising collection of tracks that straddles genres – country-folk ballad, experimental reggae/funk, techno, electronic soundscape, jazz, choral, goth metal etc. – with three live tracks – by Koos Kombuis, David Kramer and a performance of Paul Mealor’s ‘Invictus’ – thrown in. Most but not all are South African musicians (Mealor is Welsh). Houston-Lock, who formed his band The Sighs of Monsters in the UK and who have recorded a translation of Ingrid Jonker’s ‘Tekening‘, lives abroad. Except for Mary Oliver, and William Ernest Henley who wrote ‘Invictus’, all the poets are South African.

Not every track here fits the bill of “songs based on poems” – and it’s clearly the intention to test the liminalities of the idea. Some are the result of creative collaborations between poets and musicians (e.g. Lesego Rampolokeng and the Kalahari Surfers, or Robert Berold and Larry Strelitz, who have worked together on and off for decades now). The Buckfever Underground is more like a poet-band project, where Toast Coetzer reads the often meandering and vivid landscapes of his poems to the background weaving of chunky electric guitar and drums, as if the point of the performance is the live search for the moment when the two cross paths. Mzwakhe Mbuli, as far as I know, always performed his struggle poems to a backing track. ‘The Beat’, which was to become one of the mainstays for the anti-apartheid left, was recorded in 1986 in the Shifty studio with amongst others Ian Herman and Gito Baloi, who a year later would form Tananas.

The work of poet-musicians is also included: Abdullah Ibrahim (whose reminiscing in ‘Knysna Blue’ shifts into some interesting, slow freestyle jazz poetry), Koos Kombuis, and the reclusive Gert Vlok Nel, known for coming out of hiding every so often to perform his poems as songs.

Musicians aren’t always faithful to the original poems they use – modifying them in small or big ways to fit the rhythmic needs of their songs, deleting lines, or shifting and repeating them to create a chorus, or for effect. David Kramer makes mostly slight changes to Christopher Hope’s ‘Kobus Le Grange Marais’ – which Hope calls a “satirical ditty” – to suit his characteristic African-infused country Cape carnivalesque style (at one point he goes as far as changing the name of a town, and it would be interesting to known why). I found this annotated version of the poem online, which shows the changes for his performance of the song at the Market Theatre in Johannesburg in 1983. I’ve only quoted from the last two verses, and Kramer’s changes are in square brackets:

From Slagtersnek to [R’]Sonderwater
He smears the Boers’ good name;
And God is still a rooinek God,
Kommandant op [Koppiefontein] {Koffiefontein}:
[And] if what I hear about heaven is true,
[Well] it’s a racially mixed affair;
In which case, ons gaan kak da’ bo,”
Said Kobus Le Grange Marais

“[Now] the times are as cruel
As the big steel wheels
That carried my legs away;
Oudstryders like me
Are out on our necks
[We] {and} stink like the scum on [the] {a} vlei;
And [the] white man puts the white man down,
The volk are led astray;
There’ll be weeping at Weenen once again,
No keeping [those] {the} impis at bay;
(2 times) [And the/ yes, the] {and}tears will stream
From the stony eyes
Of Oom Paul in Pretoria Square:
[For/’Cause] he knows we’ll all be poor whites soon,”
Said Kobus Le Grange Marais

For their version of Mary Oliver’s ‘When I Am Among The Trees’, Lucy Kruger & The Lost Boys repeat lines and phrases for effect (also changing ”Stay awhile” to “Why don’t you stay awhile?”) and reorganise the last two stanzas into a kind of chorus to create an hallucinatory sense of the movement and energy of swirling trees. The result is a haunting, almost bewitched soundscape – drawing on a sense that is already there in the poem, but creating something darker, more dramatic.

Koos takes a different approach. They shatter the necessity of the form of Chris van Wyk’s ‘In Detention’ entirely, fragmenting it into a series of rearranged statements and ad libs with the poem as a reference point. It’s a piece saturated with a ‘fuck you’ to the apartheid state and everything that comes with it.

Compare this to Mealor’s ‘Invictus’ – a poem Nelson Mandela read to other prisoners on Robben Island. It’s a choral for a 70-voice children’s choir, composed as the third part to a three-part movement called ‘Spirit of Hope’, and apparently performed in Cape Town (although I don’t know where this recording’s from). Mealor changes the poem too, dropping a stanza, repeating phrases and lines, but, like Lucy Kruger & The Lost Boys’ take on Oliver’s ‘Trees…’, is an impressive example of how a poem can be carefully reset to music using precise and articulate phrasing. Henley’s four-beat poem lends itself more easily to this sort of job than, for example, ‘In Detention’, with its modernist energy and form. But it’s worth reading the poem while listening to the recording to see how Mealor does it – never mind the stunning percussive coda to the composition.

‘Sunship’ – a tribute to John Coltrane – is equally careful, with Strelitz’s aching melody following the phrasing in Berold’s poem closely; although I feel that at times Strelitz’s predilection for the blues vocable (the ‘mmm-ing’ and ‘oh-ing) gets in the way of the poem – I wanted to hear it more starkly, the lines more alone.

In counterpoint to Mealor’s composition, Rampolokeng and Ibrahim work organically with different forms – reggae/funk, and jazz – with freer, and ultimately more complex phrasing, but to a different purpose.

These sorts of collaborations (let’s call the use of a poem such as Jonker’s a form of collaboration between the musician and the poet’s work) shift audiences and introduce new ‘readers’ to poems – and maybe the other way around too. It’s a way to wrest us out of our cultural echo chambers. I hadn’t read Christopher Hope’s poem, and didn’t know David Kramer had sung it, and haven’t read much of David Chislett’s stuff. Shannon Hope’s ‘Daylight’ (Chislett) is beautiful and moving, drawing effectively on the universal resonance of its refrain of love and loss: “My love was never going to be enough/in daylight”. Matthew Van der Want’s interpretation of Chislett’s poem ‘For You Or Someone Like You’ closely maps his own concerns in his song-writing, refracting interpersonal exchanges and situations through his complex and layered mix of tracks, effects and rhythms. I also hadn’t heard Edi Niederlander’s electric, energetic version of ‘Come Wi Goh Dung Deh’, which sent me back to listen to Linton Kwesi Johnson’s dub original.

The list could be expanded. There must be traditional oral poetry in indigenous languages set to music. I’d be surprised if someone like Miriam Makeba hadn’t done this. Johnny Clegg drew on the izibongo tradition and rituals in his music. There’s definitely more that’s gone on in the performance poetry or hip-hop – but you need to be immersed in the scene to know where to find it. I also thought of Maskandi, which the poet Mxolisi Nyezwa is currently exploring as a way to reinvigorate the isiXhosa poetry tradition. But that moves quite quickly out of the more straightforward ‘poem to music’ frame that Houston-Lock and Drewett are using.

As it is, the list is exciting – and I really enjoyed listening to these tracks. That they have taken the time to put this selection together is another selfless act of informal archival work that is the hallmark of their podcast series – a curation and reframing of cultural production in a new and simultaneously historical light. It is exactly how cultures flourish, and, although probably less acknowledged, is no different to the important work being done by institutions such as the Amazwi South African Museum of Literature in Makhanda. It deepens us, and reminds us of the possibilities that are right in front of us.

Alan Finlay is a South African poet who lives in Argentina. He has published several collections of poetry, most recently ‘That kind of door’ (2017, Deep South Publishing), and ‘The cactus of a bright sky’ (2021, Dye Hard Press). He has  founded and edited poetry journals, and co-edited selections of South African poetry and prose. He works on internet and media rights, and part-time at the Wits Centre for Journalism in Johannesburg.

2 Replies to “Poetry In Music”