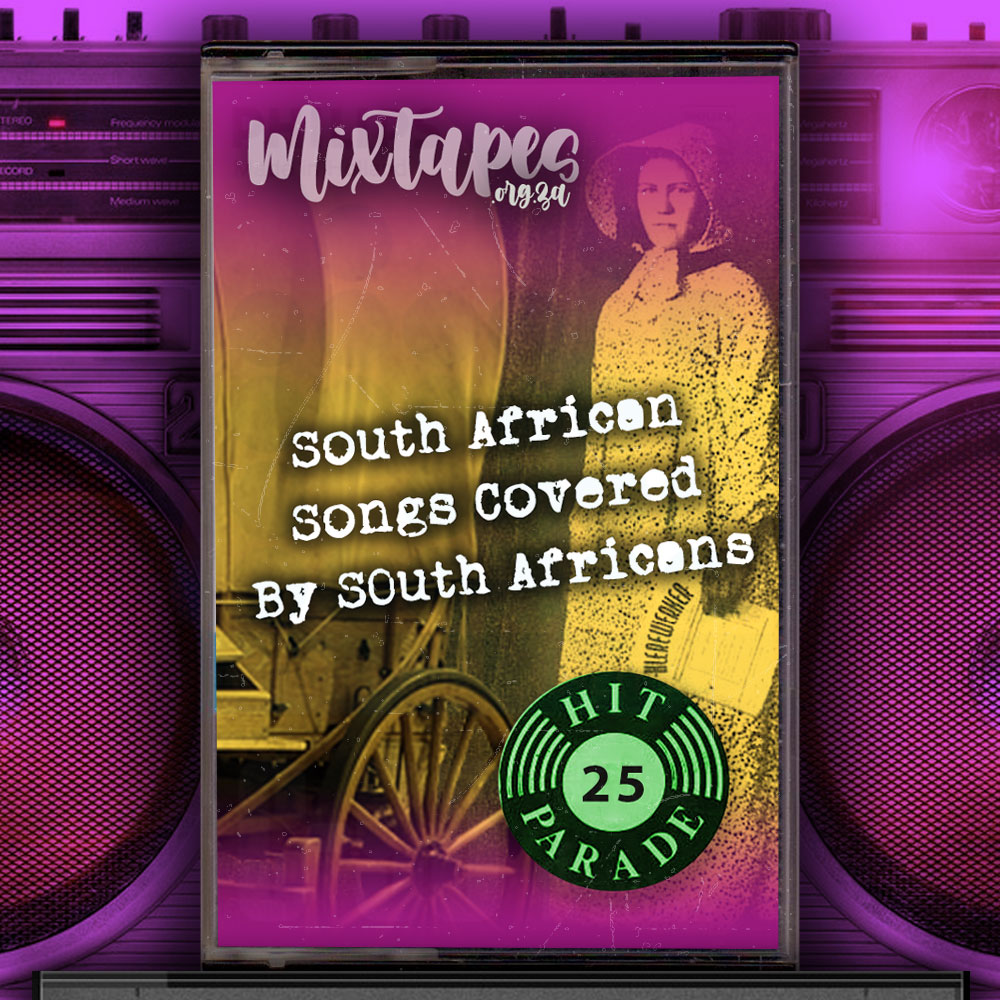 Covers are an integral part of popular music. Some bands make a living out of playing covers, some musicians even make a career imitating another musician or band, covering their repertoire or a specific period of their music. This can take place the form of reduplication covers, in which live performances are approximated as closely as possible. Most commonly, musicians simply cover one or more songs by other performers during their career.

There are many motivations for covering another’s song, one of which is simply to choose a song which can make money, but often it has to do with paying homage to the original song or performer, and many of the songs included here fit that description. These songs tend to show a great deal of respect to the original version, in terms of tempo, melody and lyrics. Here one can include songs like Arno Carstens’ cover of Ballyhoo’s “Man On The Moon”, Johannes Kerkorrel’s cover of Bernoldus Niemand’s “Snor City”, Zim  Ngqawana’s cover of Abdullah Ibrahim’s “Chisa”, Miriam Makeba’s version of Hugh Masekela’s “Soweto Blues”, QKumba Zoo’s cover of Bright Blue’s “Weeping”, Sharon Katz & the Peace Train and Dorothy Masuka’s version of “Meadowlands”, made famous by Nancy Jacobs and her Sisters, African Jazz Pioneers & Thembi Mtshali’s cover of Miriam Makeba’s “Pata Pata”, David Kramer’s version of Roger Lucey’s “Dry Wine” , Urban Creep’s interpretation of the Cherry Faced Lurchers’ “Shot Down”, Vusi Mahlasela’s cover of James Phillips’ “Africa Is Dying”, Jennifer Ferguson’s version of David Marks’ “Master Jack” (made famous in South Africa by Four Jacks And A Jill), Tony Cox’s cover of Edi Niederlander’s “Ancient Dust Of Africa”, Sonja Herholdt’s cover of David Kramer’s “Skipskop”, Matthew Van Der Want and Chris Letcher’s cover of the Springbok Nude Girls’ “Blue Eyes”, Laurika Rauch’s version of Koos Kombuis’ “Liza Se Klevier” and Tonia Selley’s interpretation of another Koos Kombuis song, this time “Onder In My Whiskeyglas”.

Several artist included here have paid homage to Johnny Clegg’s music (whether with Juluka or as a solo artist). None of the covers included here have tried to imitate the crossover (Zulu-Western folk-rock) style of Johnny Clegg’s music and so while these songs remain true to the sentiment of the originals, they take them in to a different stylistic terrain. These include the acapella version of “Impi” by Not The Midnight Mass, and the rockier versions of “Great Heart” by Hog Hoggidy Hog, “Africa” by Wonderboom and “December African Rain” by the Springbok Nude Girls.

Two songs on this mixtape are an interesting form of cover song in which the cover versions include musicians who were part of the original version. David Kramer joins Jack Parow in his cover of Kramer’s “Biscuit And Biltong” while several members of the Gereformeerde Blues Band join with Arno Carstens and others to cover “Liefde”, originally recorded by the Gereformeerde Blues Band.

There are also socially interesting covers included here. Bernoldus Niemand turns the Radio Rats’ fairly international-sounding “Welcome To My Car” into a truly South African song, especially through his use of South African accent in his vocals. By joining together to cover the Freedom Children’s “Tribal Fence”,  Margaret Singana and Rabbitt go some way towards crossing the tribal fence they sing about. Finally, by sampling Hotline’s “Jabulani”, Prophets Of Da City, a Western Cape coloured hip hop band playfully pay homage to a commercially successful  white western/black neotraditional crossover song. To what extent their sampling of “Jabulani” becomes a cover (or not) is something to ponder.

We have thoroughly enjoyed compiling this selection of covers in which South African musicians have celebrated great South African songwriting and performance. So many emotions and moods are captured through these interpretations. We hope it drives you to go in search of some of the originals you haven’t heard, or even to re-listen to the originals as a matter of comparison. Also let us know if we have left out any of your favourite SA covers of SA songs: there’s bound to be a part two to this particular theme.