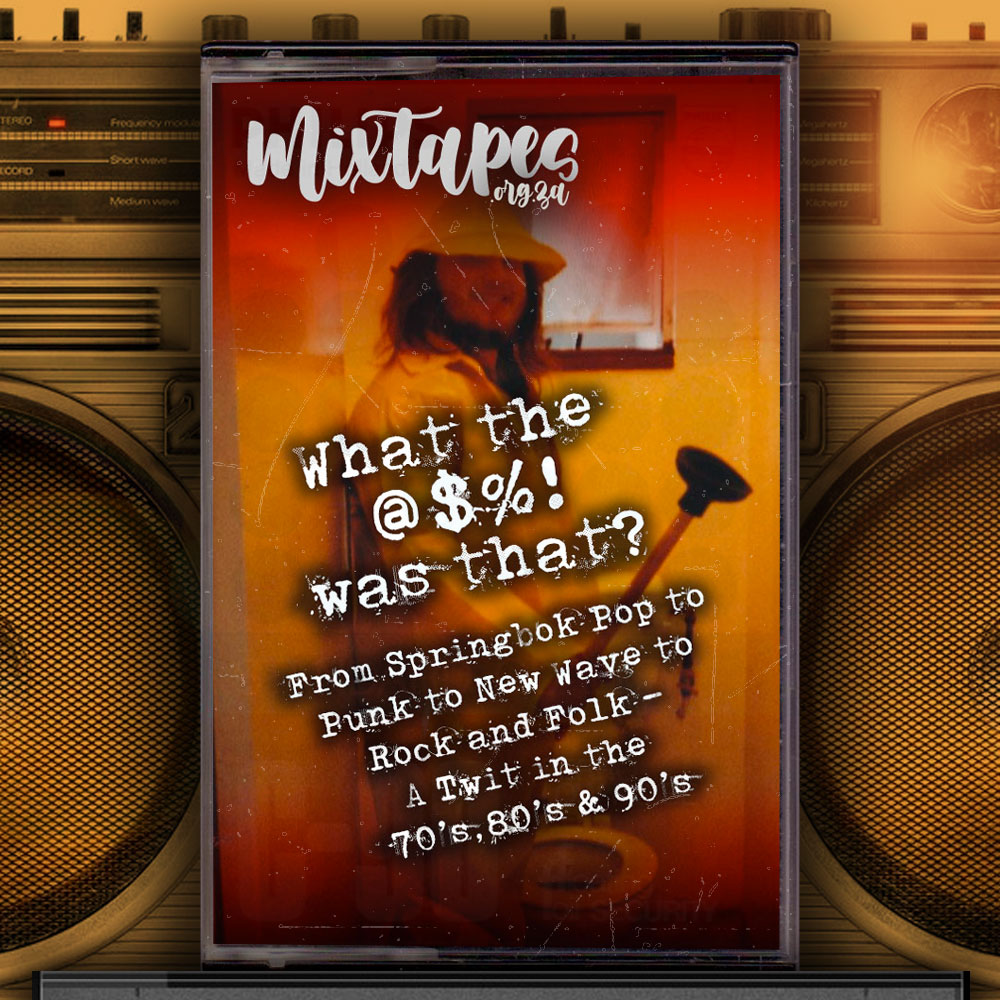 “What the @$%! was that1” asks Leon Lazarus as he invites you to listen to his personal mixtape of the sounds around him growing up in the suburbs of Johannesburg in the 70s and 80s, before setting out into the world, but his ears still tuned to the Southern Hemisphere. From Springbok Radio Pop to Punk to New Wave to Rock and Folk in the 70s, 80s, an 90s, this was the soundtrack to his upbringing in South Africa.

Clout – Substitute
This is where I begin. I was only four when the song dropped into the charts and yet I remember singing along to it with my siblings. It was a brilliant piece of pop music making and deserved its place in the international charts. I had the distinct pleasure of interviewing Cindy Alter a few years back, and I was completely start-struck.

Jessica Jones – Sunday, Monday, Tuesday
This is another piece of pop genius and an enduring earworm that I could sing along to fifty years after hearing it for the first time. I was only six when it came out, but my sisters had the single playing on repeat, so it is now fused with my DNA.

Maria – Clap Your Hands, Stamp Your Feet
You know that every seven-year-old would be clapping and stamping along to this South African pop classic. Back in 1973, this song was everywhere and remained on heavy rotation at least until I sprouted hairs in parts unknown.

Glenys Lynne – Ramaja
This was the first Afrikaans language song that didn’t drive me round the bend. In primary school, Afrikaans was already a problematic language for me. It brought with it all sorts of complications. As a Jewish kid in a government school, I was forced to sit through sermons delivered by domienees, sing the national anthem (which I refused after a time), and attend veld-school where a neo-Nazi took pleasure in beating the spit out of us. When I found myself enjoying this song, I was as surprised as the next person. I am sure I wouldn’t have admitted that in 1976.

Ipi nTombi – Mama Thembu’s Wedding
This was the very first live stage show I was taken to, back in 1976. It was the year in which my primary school was sent home for fear of the unrest spilling over from nearby Alexandra Township. I clearly recall walking through the grounds of the Civic Theater in Johannesburg and climbing the steps to the enormous lobby. I remember the excitement of finding our seats, and the curtain going up. Most of all, I remember Margaret Singana’s spectacular performance. Despite it being a controversial musical about the plight of black women and their migrant men written by two white women, the music continues to hold a special place in my heart.

Paradise Road – Joy
A black all girl group singing a beautiful, touching, and immensely enjoyable song was an important step along my path to shrugging off the decades of bullshit we had been fed by the Apartheid government. At a time when the country was tearing itself apart, this brave song had us singing along. Looking back, the chorus was wonderfully subversive: “There are better days before us and a burning bridge behind, fire smoking, the sky is blazing. There’s a woman waiting, weeping and a young man nearly beaten, all for love. Paradise was almost closing down.”

Rabbitt – Charlie
My sister-in-law was one of the hundreds of screaming fans that camped outside the Duncan Faure’s house back in the 70’s. She and I got on like a house on fire, and her infatuation with the band was catching. I like the band enough to be able to sing along, but I think they needed to find a place on this list more for the fact that they were ever present in my life through the late 70’s and early 80’s.

Ballyhoo – Man On The Moon
This song makes it into the list by osmosis. I was not a huge fan of Ballyhoo, but jolling in Joburg during the 80’s, you couldn’t escape them. If you walked through Hillbrow on the way to a disco or bar, you were bound to hear Ballyhoo spilling out onto the street from a dinner club or music venue. After a while, they just became part of the wallpaper, and then you found yourself humming the damned tune.

éVoid:- Shadows
I spent my teenage years in a club called DV8, drinking, smoking, and generally being a hooligan. éVoid regularly made an appearance in the basement dive and never failed to bring the house down. Shadows was their biggest hit, and it brings back the fondest of memories.

Sipho “Hotstix” Mabuse – Burn Out
I know, I know. You’ve heard it a million times. Make it a million and one. I love the song because it is so tightly intertwined with a memory that I recall like it was yesterday. My buddy Steven and I are gunning it down Louis Botha Avenue in Johannesburg at about 3am, on our way to a dice at the Pickin’ Chickin, and I do my radio DJ song ID over the iconic intro to Burn Out. Man, good times!

David Kramer – Botteltjie Blou
After matriculating, I started a law degree though Unisa and studied at the RAU library in Johannesburg. That’s where I first took notice of David Kramer. His posters were everywhere on campus, I remember getting a copy of Bakgat! from the record library and falling in love with it. I became a fan. To this day I have the same reaction as I did the first time I heard Botteltjie Blou. It is a sad song that pierces deep. I am instantly reminded of the terrible wave of deaths associated with the consumption of methylated spirits in the early 80’s. Back then, we spoke about it with a “shame, hey,” but the better I understood the world, the more I grasped how landless, poor, desperate, and brutalized people would go to any lengths to dull the pain, even drinking meths through a half-loaf.

Mango Groove – Pennywhistle
In the early 80’s, just out of matric, my circle of friends used to hang out at a club in Norwood called Quavers. It was a reasonably priced Jazz venue with great murals and a small stage in the corner. Steve, Mel, Lee, Gav and all the rest of us were regulars and could be found there at least once or twice a week downing flaming Sambucas with coffee beans floating in them, or late-night Irish coffees. Mango Groove was a regularly featured band and we landed up seeing them at least ten or fifteen times. It must be said that a good part of our gang lusted after Claire Johnston, so maybe the Sambuca wasn’t the only draw. Lacking sex appeal but perhaps the more memorable member of the group was Mickey Vilakazi, the trombonist. A showman with his instrument, he was both brilliant and fun to watch. Great memories.

Juluka – Thandiwe
I first saw Juluka perform live at the Free Peoples Concert on the WITS University sports fields. It wasn’t the last time. I was lucky enough to see the band bring the house down a few years later at Grahamstown’s Settlers Monument theater, and I attended Cleggs final farewell concert in San Diego. I remember hearing the song Thandiwe for the first time when my older brother and his friends had African Litany on the Hi-Fi. I can’t be sure, but today it feels like that was the moment I found the link between the music that was coming from Freddy’s PM9 powered record player in the back yard and the popular music on my radio. In the end, Juluka turned out to be crucial in shaping my attitude to Apartheid. Their songs helped break down my ideas of what being African meant and set in concrete my resolve to defy the SADF draft and do what I could to affect a different outcome in South Africa.
Johannes Kerkorrel en die Gereformeerde Blues Band – Ossewa
When the Voelvry tour came to Grahamstown in 1989, it was a lightbulb moment for me. Here was a group of Afrikaners who were pissed off about the same things I was. Even better, they played rock and blues and they were satirical and wry. It ticked all the boxes for me. I could have chosen a more political song from the tour, but honestly, I cracked up when I heard Ossewa for the first time. My family ran a motor spares shop in Edenvale, so the thought of cruising to Transkei at 160km/h in a V6 ox wagon with Elvis playing on the tape deck was brilliant!

Jack Parow – Cooler as Ekke
Jack Parow is one of those guys that figured out Afrikaans rap was waiting for a champion and a sense of humor couldn’t hurt. This is one of those songs that will remain evergreen for me.

Jack Parow and Valiant Swart – Tema Van Jou Lied
And then, Jack Parow showed his softer side by working with Valiant Swart to turn a well-crafted song into something extraordinarily touching and beautiful.

Vusi Mahlasela – Say Africa
The song Say Africa was written and originally performed by Dave Goldblum and appeared on his album Valley Road in 1997. Vusi Mahlasela took an already brilliant song and turned it into an iconic South Africa anthem. I find myself singing the chorus every now and again, especially when I am feeling a little homesick.

Urban Creep – Shot Down
I have always been a fan and admirer of Chris Letcher, not least of all because I had the pleasure of playing on a stage at his side. The fleeting moment our band went supernova at Jameson’s remains one of my most treasured memories. But he has never been better than when he paired up with Brendan Jury in Urban Creep. It gives me chills.

Springbok Nude Girls – Blue Eyes
I fell for SNG long after everyone else had. When I first heard Blue Eyes, I was already in the United States back in the early 2000’s. The song begins as a serene lullaby and then explodes into its signature fuzz. It is beautiful throughout and reminds me of a passionate argument with someone you love.

One Large Banana – Leave This Town
You might think I say this because I count Brett as my closest pal, but I have always loved his first EP Don’t Feed the Animals. It captures a moment in South African music and Grahamstown’s college vibe. I like to think it would have been the music I’d have been playing had we continued together in a band. More than anything, the songs are bloody catchy and turn into earworms immediately. A nod to Gareth Sweetman on Drums whose dad passed away recently, John Taylor on Guitar who is now quite respectable, and the smooth Jo Edwards with the golden pipes.