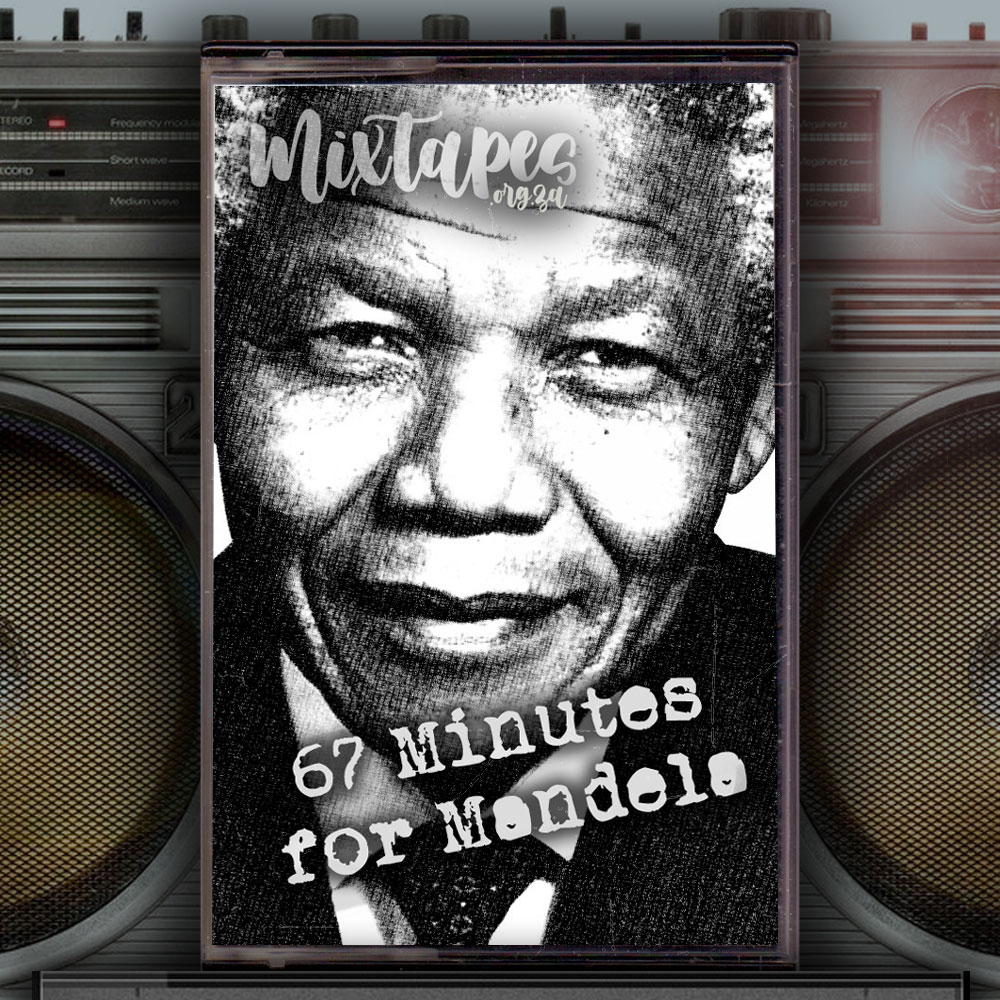 The 18th of July is Mandela Day, the date on which we celebrate Nelson Mandela’s birthday. It is also the date of the “67 minutes for Mandela” campaign, when everyone is encouraged to volunteer 67 minutes of their time to do something for their community. The message of the Mandela Day campaign is that Nelson Mandela fought for social justice for 67 years and in return people are asked to reciprocate by contributing 67 minutes.

This mixtape celebrates the life and contribution of Nelson Mandela by featuring 67 minutes of music recorded in his honour.

There are many songs we have not featured here simply because there is an abundance of songs to choose from and therefore many songs simply could not be included. We decided to feature musicians from our own continent, and mostly from South Africa. Some of these songs were written while Mandela was still in prison and at the time they expressed a yearning that he would one day be free. This spirit of hope was particularly captured in Hugh Masekela´s “Mandela (Bring Him Back Home)”, Chicco’s “We Miss You Mandela”, and Savuka’s “Asimbonanga” – all of which became popular across South Africa in the late 1980s. Chicco’s song was released as “We Miss You Manelow” in a (successful) attempt to bypass censorship of a song overtly about Mandela. Youssou N’Dour’s “Nelson Mandela” celebrated Mandela’s life from Senegal, while Abdullah Ibrahim recorded “Mandela” from the distance of exile.

In the aftermath of Nelson Mandela’s release from prison, on the 11th February 1990, several musicians released songs commemorating his life to that point, and celebrating his new-found freedom. Brenda Fassie’s “Black President” was the most popular of these, especially on South African dance floors, while Bright Blue’s “Madiba” was a more circumspect tribute. Other tributes soon followed, including Prophet of Da City’s iconic “Neva Again” and the African Jazz Pioneer’s anthemic “Viva Madiba”. The mixtape closes with a sequence of lamentful songs in praise of Nelson Mandela: Vusi Mahlasela’s “Ntate Madiba”, Dorothy Masuka’s “Mandela”, Linda Kekana’s “A Song For Madiba”, Khadja Nin’s “Mzee Mandela”, and Simphiwe Dana’s “Madiba”.

Assembling the mix, it struck us that the passion, hopes, and dreams of many of the artists at the time have been betrayed by a social justice revolution corrupted by kleptocrats and grifters. One particular thought drives home the tragedy of lost promise and broken promises.

Is there a night without a day?
Can you imagine it’s all been for nothing?
Could it be any other way?
Oh no, never, no, no

One can’t help wondering if it was all for nothing. Perhaps if we’d imagined the conditions that might betray the hopes and dreams of a nation back in 1990, it might have been prevented. But we didn’t, and so today millions still live in abject poverty as social services, infrastructure, public utilities – everything – collapses. If ever there was an ironic metaphor for this decay, a Minister of Transport landed in hospital following an accident allegedly caused by potholes they’d failed to have repaired.

The only growth is crime, violence, and government corruption, and it will remain on-the-up while decent and hard-working South Africans have anything left to steal or the endurance to carry on sweating, bleeding and weeping.

Still, we can’t say it was all for nothing. It wasn’t. But at the same time, few of us are doing the same optimistic dance we were doing 30 years ago. It is hard to dance in the face of the biggest disappointment of the 20th Century.

But, the music was great, wasn’t it?

Thanks to these musicians, and many others, who dedicated their time to write and record songs in honour of Nelson Mandela, his legacy will certainly live on in song, a reminder to us and future generations of what he stood for, and a challenge to us to make our own contribution towards social justice. There is still a great deal of work to be done.