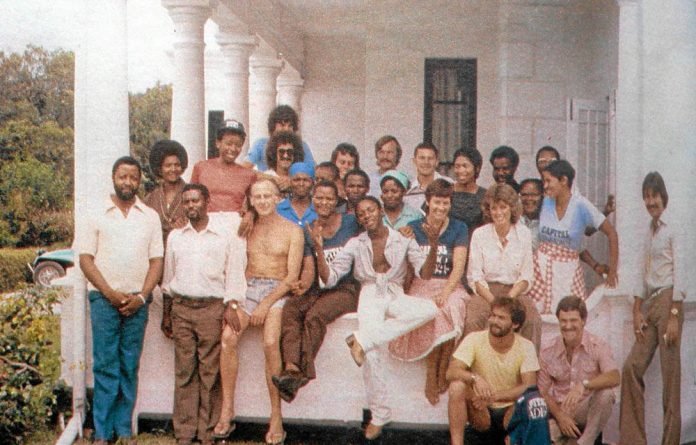 From late 1979 until 1996, independent radio station Capital Radio was to be heard over the South African airwaves. During the apartheid era it intentionally set out to be an alternative to apartheid government controlled SABC radio stations.

Capital Radio came into existence because of a loophole created by the apartheid homeland system. In 1976 Transkei was the first homeland to accept phony independence from the apartheid government and based on this supposed independence future Capital Managing Director John Moody, approached the Transkei head of government, Chief Kaizer Matanzima with the idea of setting up an independent radio station, an idea which ultimately led to Capital Radio going on air for its first official broadcast on December 26 1979 on 603MhZ medium wave and also on short wave. Working with Michael Bukht of Capital Radio in London, Moody went about setting up a South African station based on similar lines to Capital Radio in London. Importantly, it was Moody’s plan for the station to be anti-apartheid in principle, as far as was possible within the constraints of apartheid South Africa.

The station made a point of providing the most accurate and unbiased broadcast news available in South Africa, often following leads picked up by the liberal press so as to provide alternative news to SABC’s pro-government propaganda.

Capital Radio also set about challenging the SABC’s music monopoly which had meant that until December 1979 all music on South African airwaves was ethnically segregated and the nationwide Radio 5 and regional radio stations plied listeners with lyrically tame and musically very narrow, restricted to very few genres, mostly disco (USA and Euro disco), pop (including a good dollop of Euro pop), middle of the road country and rock. The SABC’s separate development music policy meant that the main popular music channels restricted their listeners to a narrow predominantly white and ‘coloured’ urban oriented popular music. The supposedly national top 20 hit parade which was broadcast on SABC’s Springbok Radio was severely doctored to reflect a similar narrow spectrum of music. The result was that South Africa’s radio audiences were racially and ethnically divided and consequently maintained separate musical tastes

In contrast, before going on air the station promised listeners that “We’re going to turn on more than your radio’ and the station’s main slogan was ‘All the hits and more’, referring to their news and sports coverage as well as no formal censorship and a wide choice of musical styles. However Capital’s play-listing policy challenged the status quo. By including “world pop, rock, R&B, Jazz and the gradual emergence of crossover South African music”, Capital attracted a more diverse audience and in the process introduced this audience to music it was not familiar with, gradually affecting their taste in music, and simultaneously breaking down barriers. This was especially emphasised in the weekly Top 40 Capital Countdown where this wide selection of music was integrally promoted as a melting pot of musical styles, not just hidden away in specialist programmes.

DJ Alan Mann captured Capital Radio’s approach to music succinctly, describing how “I think the raison d’etre was to be inclusive not disruptive … it was a subtle statement achieved through inclusion and diversity, rather than an overt protest.” Kevin Savage noted that “We were a commercial radio station going after an audience. We weren’t put on this earth as an anti-apartheid radio station. We were put on this earth as a commercial radio station to make a profit for our shareholders and stakeholders.”

While Capital might not have overtly protested apartheid they certainly did not carry out the form of rigid internal censorship practised by the SABC. To begin with, Capital Radio established a strong sense of autonomy from South African government dictates. This was most clearly demonstrated in May 1980 when Pink Floyd’s “Another brick in the wall” was banned by the South African government’s Directorate of Publications and Capital Radio continued to play it. Jimmy Cliff’s “Give People What They Want” which charted on Capital, was not played on the SABC and later banned by the Directorate.

Given Capital Radio’s stated attempt to provide an alternative to SABC’s conservative music programming we thought it would be fitting to begin the SA Mix Tape Series with a series of mix tapes comprising the songs which charted on the weekly Capital Radio Countdown Top 40 charts. We have the data to provide charts for every year from 1980 until the end of 1990 and so the first volume will cover these 11 years as a starting point to the music of that time. The charts are based on 40 points for a number one position and all the way down to 1 point for a number 40 song. The lists are therefore a reflection of the chart songs which the featured songs achieved in their stay on the weekly Capital countdowns.

Note: If a song entered the charts towards the end of a particular year all points allocated to the song in the subsequent year have nevertheless been counted as part of the song’s success in the year it entered the charts. The only exception being ‘Ain’t gonna stop” by Joy which presumably charted on the 29th December 1979, if that was when Capital Radio began doing weekly countdown charts (we are not sure and all efforts to locate a chart for this date have so far been unsuccessful).