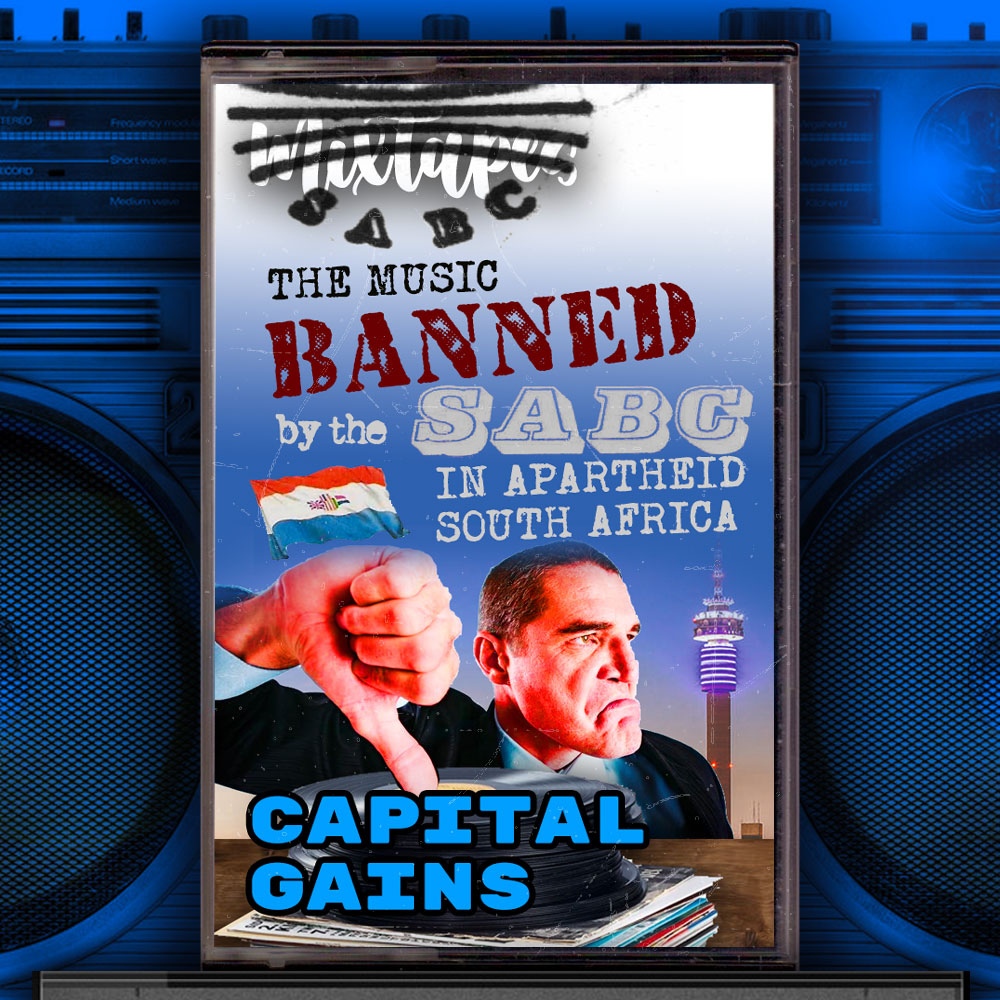 Back in September 1980, Pink Floyd’s “Comfortably Numb” was playlisted on Capital Radio. It is not clear whether or not the SABC censors realized the drug reference in the song, or even if they checked the lyrics at all, because the entire album was banned by the apartheid government’s Directorate of Publications. And so the SABC shelved the whole bang shoot, including “Comfortably Numb”.

“Tyler” by UB40 reached number one on Capital Radio on the 20th of June 1981, and stayed there for one week. As far as the SABC censors were concerned, UB40 were guilty of recording a politically provocative song. The song was about the racially-biased trial of 17 year old Gary Tyler who was convicted of murder by an all-white jury in Louisiana, despite several irregularities in the prosecution’s evidence and the lack of a murder weapon. The chorus lamented, “Tyler is guilty, the white judge has said so; What right do we have to say it’s not so.” The censors believed that the song was too similar to the apartheid context to be spun on South African radio. And so it wasn’t.

“Ghost Town” by the Specials spent two weeks at number one on the Capital Countdown on the 19th and 26th of September 1981. It reflected the dire situation in inner cities in England, including urban decay, unemployment, and violence. Its release coincided with the riots in places like Brixton and so became a soundtrack to the riots. Lines like “Government leaving the youth on the shelf”, “No job to be found in this country, can’t go on” and “The people getting angry” also spoke to the South African situation. Out of fear the SABC censors decided not to play it.

“Reggae Man” by John Miles peaked at number 22 on the Capital Top 40 on the 2nd of January 1982. Despite John Miles claiming “the reggae man good for you”, the SABC censors banned the song from airplay because it mentioned marijuana use, especially because the reggae man was “growing weed” and could “take you so high”.

“Golden Brown” by the Stranglers spent one week at number one on the Capital Countdown on the 24th of April 1982. Many listeners regarded ‘golden brown’ as an ode to heroin, as did the SABC censors who consequently ‘avoided’ it. Perceptive listeners interpreted ‘golden brown’ as referring jointly to a woman and heroin, both of whom help the protagonist to escape into peaceful, distant places. Or perhaps the SABC censors DID realize that the song was about a white man singing about a black lover …

In late 1981, Epic released Dutch band Quick’s song “Zulu” in South Africa . It was playlisted on Capital Radio in May and June 1982 but banned from airplay on the SABC because the censors believed its contentious lyrics hinted at a Zulu uprising, even though the lyrics seem to be referring to a bygone colonial era: “Pick up that spear and fight; Now that the time is right; Zulu man; Sound of the burning flight; Run like the wind tonight; Zulu man.”

Third World’s “Try Jah Love” spent two weeks at number four on the Capital Countdown on the 19th and 26th of June 1982. The SABC censors viewed Rastafarianism as a false religion or cult, and being uptight conservative Christians they banned anything that promoted Rastafarianism, including songs with the word ‘Jah’ in them. So it was goodbye to “Try Jah Love”.

Rita Marley’s late husband, Bob Marley, also got jilted by the SABC censors in 1982. His song “Natural Mystic” was playlisted on Capital in August 1982. The song warns of the approaching apocalypse as described in the book of Revelations, with reference to trumpets blowing and “a natural mystic blowing through the air”. While the song is quite vague it does have political undertones, especially to the paranoid ear. Marley refers to “Many more will have to suffer, many more will have to die” and “can’t keep them down”. The SABC censors must have feared that this could be interpreted as an overtly political song applicable to South Africa, so they banned it from airplay.

Pink Floyd’s “Not Now John” reached number 25 on the Capital Top 40 on the 18th of June 1983. It is a critique of western global politics and corporate greed. The SABC censors, primed as they were to detect swear words, would have had no need to go beyond the first two lines: “Fuck all that we’ve gotta get on with these; Fuck all that, Fuck all that”. Which pretty much summed up the SABC censors’ sentiments towards the possibility of airplay for the song.

“She’s Sexy (And 17)” by the Stray Cats peaked on Capital Radio at number 23 on the 29th of October 1983. The word ‘sexy’ no doubt raised the suspicions of the censors who went on to ‘avoid’ the song because of its rebellious tone and suggestions of promiscuity. This included mildly rebellious sentiments such as “I ain’t goin’ to school no more; It starts much, much too early for me; I don’t care about readin’, writin’, ’rithmatic or history” and slightly sexual allusions like, “Acts a little bit obscene; gotta let off a little bit of steam”. It would have been viewed as irresponsible to air such sentiments on public radio with a large school-going audience. So it was avoided.

Bright Blue’s “Window On The World” peaked at number 11 on the Capital Countdown on the 10th of November 1984. Given that the SABC was an ideological wing of the apartheid state it is not surprising that they objected to the song. It commented on the disquiet which many white South African males felt about being conscripted into a war they did not want to fight. While the rhythm is upbeat and even jovial, the lyrics lament the situation of “The young men marching everywhere, trying their best to escape” and “The young men marching everywhere, not sure how to cope.” Capital had the perceptive foresight to air the song.

“Steel Claw” by Dave Edmunds was playlisted on Capital in early 1985. While being a fairly cryptic song the SABC nevertheless objected to the political lines, “The politicians have forgotten this place”, and “So many people hanging onto the edge; Crying out for revolution, retribution.”

Don Henley’s “All She Wants To Do Is Dance” peaked at number 25 on the Capital Top 40 on the 27th of July 1985. The song is generally viewed as a critique of Reagan-era USA intervention in Central and South America. The woman in the song is seemingly oblivious to all the military shenanigans going on around her because “all she wants to do is dance”. The song includes lines like “Rebels been rebels since I don’t know when; But all she wants to is dance” and “Molotov cocktail – the local drink; When all she wants to do is dance”. For the SABC censors these references to war resembled the guerrilla warfare South Africa was involved in. They thus decided it was safest to ban the song from airplay.

Night Ranger’s “Sentimental Street” peaked at number 23 on the Capital Countdown on the 28th of September 1985. It is not immediately apparent why this song was ‘avoided’ by the SABC censors. It is about a person watching someone else walking down a street called Sentimental Avenue, and reflecting on their life. Perhaps the censors thought the line “Did you get your fill? Did you think you had to pay?” referred to prostitution. But it seems a flimsy reason to censor a song.

“Your Latest Trick” by Dire Straits peaked at number seven on the 14th of June 1986. The protagonist in the song describes the down town scene in a city: “And most of the taxis, most of the whores; Are only taking calls for cash”. That, together with reference to the prostitute’s “latest trick”, was enough for the SABC censors to ‘avoid’ the song.

Tone Loc’s “Wild Thing” went to number one on the Capital Countdown on the 3rd of June 1989, where it spent one week. The ‘wild thing’ referred to by Tone Loc was inconsequential sex for fun. The song describes various scenarios where this happened to the central character. In one scenario, for example, he describes how he “Couldn’t get her off my jock, she was like static cling; But that’s what happens when bodies start slappin’ from doin’ the wild thing.” The SABC censors promptly slapped the song with an airplay banning order.

In “Together As One” Lucky Dube asked the question, “Too many people hate apartheid, why do you like it?” The SABC censors’ answer was to ban the song from airplay. However, on Capital it reached number two, where it spent two weeks, on the 3rd and 10th of June 1989.

If anything, Salt N Pepa’s “Let’s Talk About Sex” is a positive song about the importance of sex education. It charted on Capital in late 1991, reaching number 6 on the 7th of December 1991 (we’re not sure if it moved further up the chart because we are missing some charts). In the song they sing, “Now we talk about sex on the radio and video shows; Many will know, anything goes; Let’s tell it like it is; How it was, and of course, how it should be; Those who think it’s dirty have a choice; Pick up the needle, press pause, or turn the radio off.” Talk about inviting the censors to the party! They needed no second bidding and couldn’t get to the record player quick enough … and picked up the needle for the entire nation.

Fortunately Capital Radio didn’t waste money and time on censorship committees and sticky pieces of paper with ‘avoid’ written on them. Capital listeners got to hear a wider array of music both musically and lyrically, often not even realizing that the SABC wasn’t playing some of their favourite songs. They were encouraged to be more open-minded and free. Which is exactly what the apartheid censors were trying to repress. This mixtape goes out to Capital Radio, for being there when South Africans needed you most!