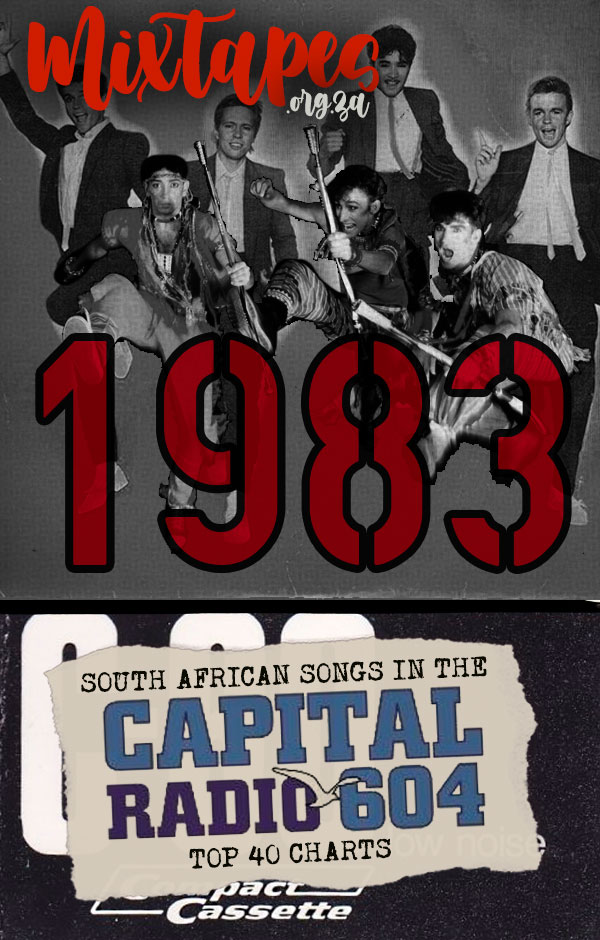 It was fairly slim pickings for South African music on Capital countdowns in 1983 but the year did produce some South African classics. It was the year when different forms of cutting edge music styles developed, alongside a hybrid of music, fashion and language, to create a new identity of openness and togetherness rather than apartheid separation and repression. As Rene Veldsman of Via Afrika described , “even though we had the apartheid laws and that sort of thing, we found freedom in music, and I think lots of groups felt that way, and that’s why we got some great music out in the ’80s. It was kind of like a club, a secret place to go where we could be free.”

Juluka had been around for a while, charting on Capital each year of the 80s so far, and they continued to produce excellent songs out of a mix of neo-traditional Zulu, Celtic folk and rock music, what Johnny Clegg described as “a fascinating adventure in trying to construct a meeting point between different forms of musical expression, rhythm, melody (and) tone.” Clegg also sustained his exploration of Zulu culture with Sipho Mchunu in several other ways, including language, dance and dress. Meanwhile eVoid had started out in Brakpan in the late 70s as Zennith, before becoming Void but by 1982 they were transformed into eVoid: fadgets adorned in a fusion of fashion styles and playing a vibrant form of what eVoid called ‘ethnotronics’, a combination of new wave, rock and mbaqanga grooves. They also developed their own style of new romantic fashion which incorporated Ndebele beadwork and other Southern African influences. At the same time Via Afrika were also expressing themselves through music and fashion. Rene Veldsman described the group as “an explosion of talented people getting together and expressing themselves”. Via Afrika’s ‘curio-pop’ ( a term coined by band member Lucas Crouse) was a combination of pan-African and western music styles, all done with the intention of partying and dancing against the system – of racism, homophobia and separation.

Veteran Billy Forrest and former Pop Shop presenter Karl Kikillus had fringe hits on the countdown, and the novelty act the Soft Shoes who had won the tv “Follow That Star” talent competition entered the charts on the back of that exposure. But 1983 can be remembered as the year in which a fresh fusion of African-western musical styles combined with broader elements of cultural bricolage entered the mainstream of South African music.

*Unfortunately we were not able to track down the original vinyl release of Billy Forrest’s “I loved ’em everyone” in time to include on this mixtape and we have had to rely on a later version.