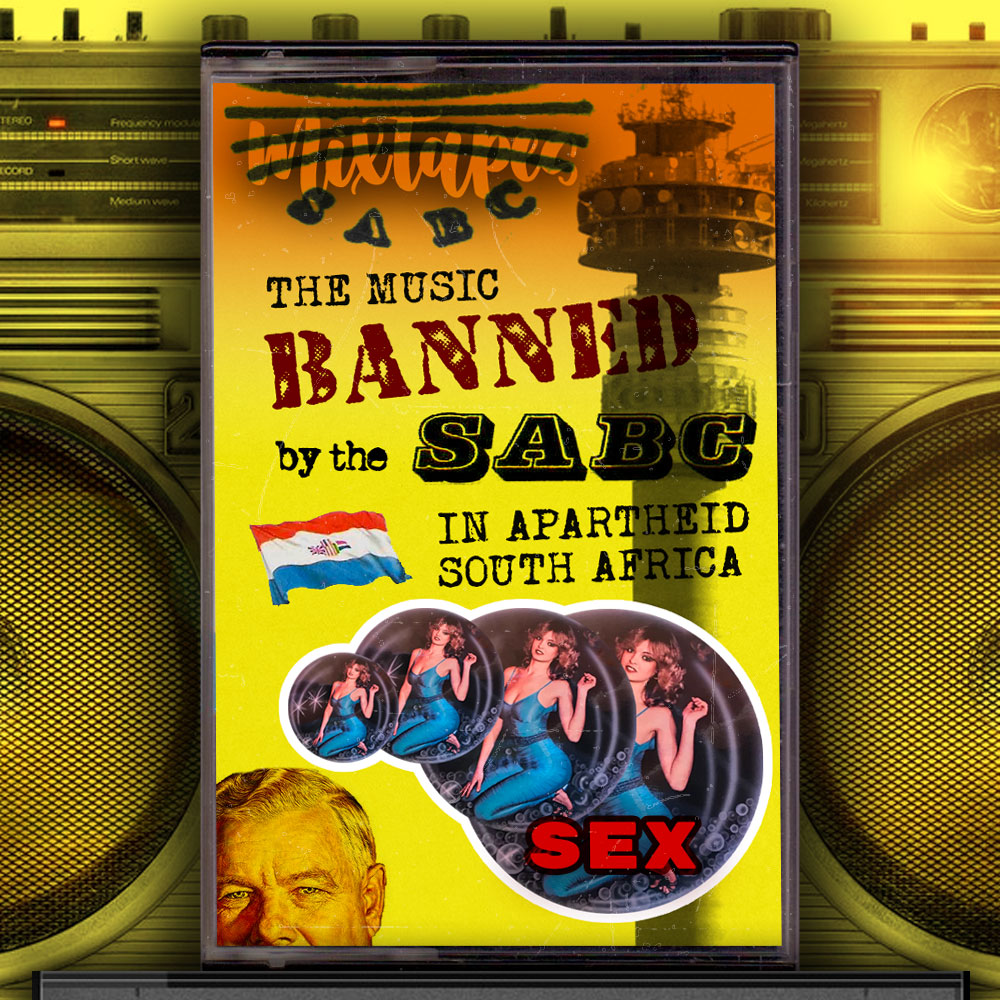 It is common practice throughout the world for radio stations to ban songs about sex from airplay. This is especially the case with public broadcasters like the British Broadcasting Corporation (BBC) who famously banned (from airplay) songs such as Serge Gainsbourg and Jane Birkin’s “Je t’aime” and Frankie Goes to Hollywood’s “Relax”. But usually such radio censorship relates to songs which are overtly sexual, and the broadcasters are concerned that the songs are inappropriate for younger people in the audience. The SABC took their concerns about sexual lyrics (and sounds) to an extreme level, often banning songs from airplay with just cursory reference to something sexual or even to one night stands or sex workers. There was a strong Calvinist moral directive to SABC sexual censorship, according to which, the less said about sex, the better. This mixtape includes a broad spectrum of examples of music banned for taking on the topic of sex.

On one extreme the SABC banned a creepy song like Gary Glitter’s “Happy birthday”, a song written to a previously underage girl who has now come of age and the singer can’t wait to have sex with her. On the other extreme there were fairly innocuous songs with vague or cryptic reference to sex, such as Flash Harry’s “Handlebars” with lyrics like “you gotta grab your partner by the handlebars” and at the end of the song “the boys at work will laugh at you when you say, she looked so pretty what a shame she was gay.”

Certainly, reference to same-sex relationships was a sure way to get a song banned on SABC. Examples include Edi Niederlander’s “Mabel” in which the female singer declares her attraction to a “good looking woman” and Joe Jackson’s “Real Men” in which the singer describes, “see the nice boys dancing in pairs, golden earring, golden tan, blow wave in their hair.”

Rod Stewart’s “A Night Like This” is a coming of age sex of a different sort to Gary Glitter’s song. It is about a sixteen year old boy who is going to have sex for the first time. It is not particularly explicit. Lulu’s cover of the Beatles’ “Day Tripper” was frowned upon simply because it referred to a man who was only into non-committal one night stands.

In general, songs which viewed sex as a good thing were banned on SABC. For example Brook Benton’s “Makin’ Love Is Good For You”, “Sexuality” by Culture Club, “Thrill Of The Grill” by Kim Carnes, Lita Ford’s “Hungry” in which the singer declares “I got an appetite for your love tonight, I wanna taste your sweet thing,” and Blue Mink’s “Daughter Of Someone” in which the male and female singers combine to sing “Let’s go to bed, I’m waiting for you to come on in”.

Songs which described sexual encounters were also avoided by the SABC. For example Paul Simon’s “Duncan” in which the singer’s “long years of innocence ended” and Motley Crue’s “Rattlesnake Shake” in which the woman in the song does the rattlesnake shake and makes the singer’s body ache.

The SABC censors also frowned upon songs in which singers declared their zest for sexual activity. For example Pink Floyd’s “Young Lust” in which the protagonist declares “I need a dirty woman, ooh I need a dirty girl”, Prince & the Revolution’s “Temptation” in which the singer exclaims, “Working my body with a hot flash of animal lust, temptation, all my fingers in a pool of splashing musk”, Linda Clifford’s cover of Rod Stewart “Tonight’s The Night” in which she pronounces, “The secret is about to unfold, upstairs before the night’s goes old,” and the Bernoldus Niemand cover of the Radio Rats song “Welcome To My Car” in which the protagonist welcomes a woman to his car, the back seat of which is used for sex. He sings “I find the back seat so bizarre, so come on stream up my widows please, welcome to my car.”

The SABC censors also took umbrage to songs which referred to sex workers and paying for sex. For example, “Love For Sale” by Julie London, the Night Ranger’s “This Kid Needs To Rock” and “Room Of Horror” by Sipho Mabuse, despite the fact that the character in Mabuse’s song was warning of the dangers of prostitution.

Clearly, for the SABC censors, songs about sex were to be unseen and unheard. This mixtape provides the opportunity to lift the lid on some of the songs the SABC didn’t want South Africans to hear. Enjoy!